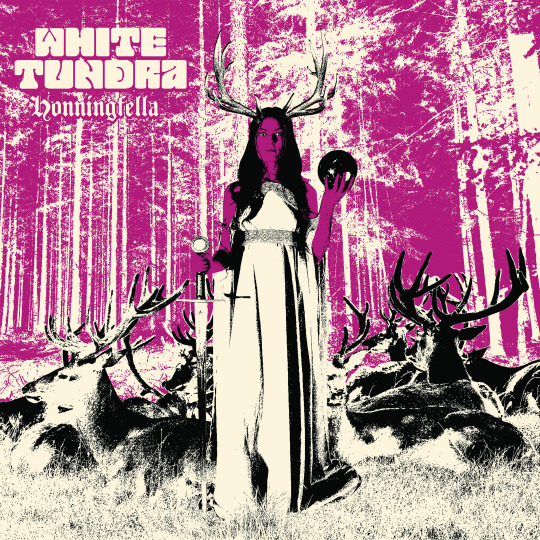 This is just cool.

Those are the first words, I swear, that popped into my fuzzy morning head when I heard WHITE TUNDRA do their thing for the first time, so I’m dropping them here to start this debut. Yes, we are premiering new music today from out of Trondheim, which always holds its share of surprises.

For some time I underestimated the interest of Norwegian bands (and fans) in stoner rock. With the advent of great acts like Taiga Woods, Kaiser, Jointhugger, Steinsopp, and many others, that claim can now be laid to rest as ill-informed and unjust. I have noticed that the stoner vibe coming out of Norway tends to be moderately-paced, with devilishly low-tuned bass and guitar, and gutsy vocals. Of course, it would be a mistake to try to put everything coming out of one country into a single categorical box.

White Tundra seems to be all-about crushing stereotypes. The Trondheim quartet is as gnarly as they come, summoning vision of long-bearded Vikings and late-night revelry. Truckfighters immediately came to mind as I listened to the warm, groovy motion created by guitarist Fredrik Moen, bassist Gunnar Lykkeslet Saether, and drummer Ola Fuglevaag, but when the vocals chime in I knew we were dealing with an animal of a different kind. They may take just a second to settle in for folks used to the clean, comforting singing of Greenleaf and Dozer, but Stevin Kresin’s gruff, gravelly manner soon becomes endearing.

If you’re one who rarely takes a chance on new names in the scene, this will give you a good wide awake slap in the face – and have you smiling afterwards! If you dig it, be sure and check out the band’s EP, ‘Graveyard Blues’ (2020), as well.

Before us stands a 9-minute gritty tone millhouse called “One More Place.” It’s the B-side from White Tundra’s forthcoming 7-inch release ‘Honningfella’ (2021), coming out June 11th on All Good Clean Records. This is one of those songs you’ll definitely want blasting at the next get-together with your homies as you toast a frosty one up to the downtuned demons of doom!

White Tundra has been going at it for four years, creating new music along the way. The band released the EP Graveyard Blues on All Good Clean Records in 2020, and are now back with a new single in 7”, ‘Honningfella’ (2021)

After some line-up changes prior to the Graveyard Blues EP, they quickly produced new music and returned to the studio. The group has guaranteed wisely, dynamically evolving into a virus resistant beast spawning two new tracks recorded in Trondheim. Mixing and mastering was performed by Niklas Källgren of Truckfighters and Enigma Experience in his Studio Bombshelter.

The band stands rooted in the dirt of Stoner Rock, inspired by bands like Monster Magnet, Uncle Acid & The Deadbeats and Skraeckoedlan, they create music characterized by heavy riffage and uncompromising rhythms. The band’s amalgamation of catchy melodies as well as dark moods will sneak up on you and scratch your sweet spot as you find yourself trapped by the thunderously relentless Honningfella.

White Tundra has evolved into a solid live band after several gigs in the Trondheim-area, and are now cocked and more than ready to hit the stages after the disease-ridden and barren concert year of 2020.