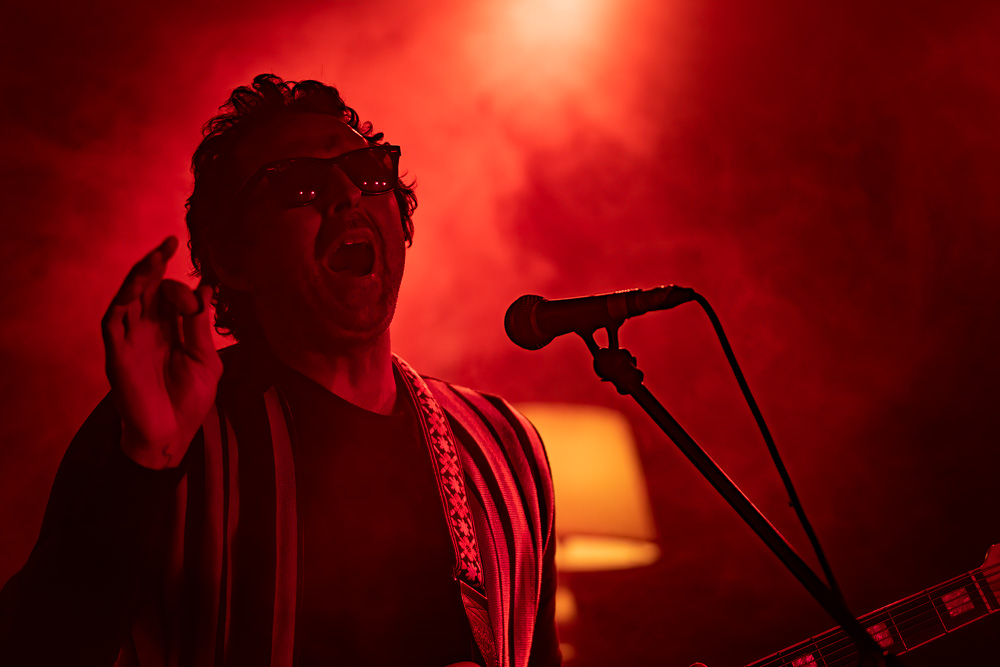 Spring has sprung! The bluebells are out. As Covid hopefully gets a little smaller in the rearview mirror, people are emerging like hedgehogs following a long but restless nap. In his first gig in 447 days, Simon Reed dusts off his camera and heads into London’s East End for an appointment at the historic George Tavern with Essex singer, songwriter and all-round raconteur Scott Lavene.

Not been out in London for a very long time and as I leave the glitz of the City skyscrapers behind I don’t mind admitting I’m a little nervous that my first venture is to Shadwell, buried deep in the East End. I’m sure it’s just because I’m out of practice, but I hope the locals won’t be too offended if I say it’s not the most salubrious part of town. I’m here to see Scott Lavene, an artist whose often whimsical lyrical stylings bare comparison with Ian Dury, John Cooper Clarke and Mike Skinner among others. Lavene’s ‘gutter pop’ (his words) attracted much praise in the form of his 2019 album Broke. It is an excellent record.

The neighbourhood might be a little sketchy, but the venue – The George Tavern, is anything but. Grade II listed, it occupies a proud corner spot on the Commercial Road. Inside, it’s magnificent. In pre-booked, socially distanced guise, the tables have candles and attendant service, and are surrounded by plush leather studded armchairs. Wooden panelling abounds. The only thing to spoil the ambience is a smoke machine on piece rates, which is rendering an air quality not seen in London since 1952. 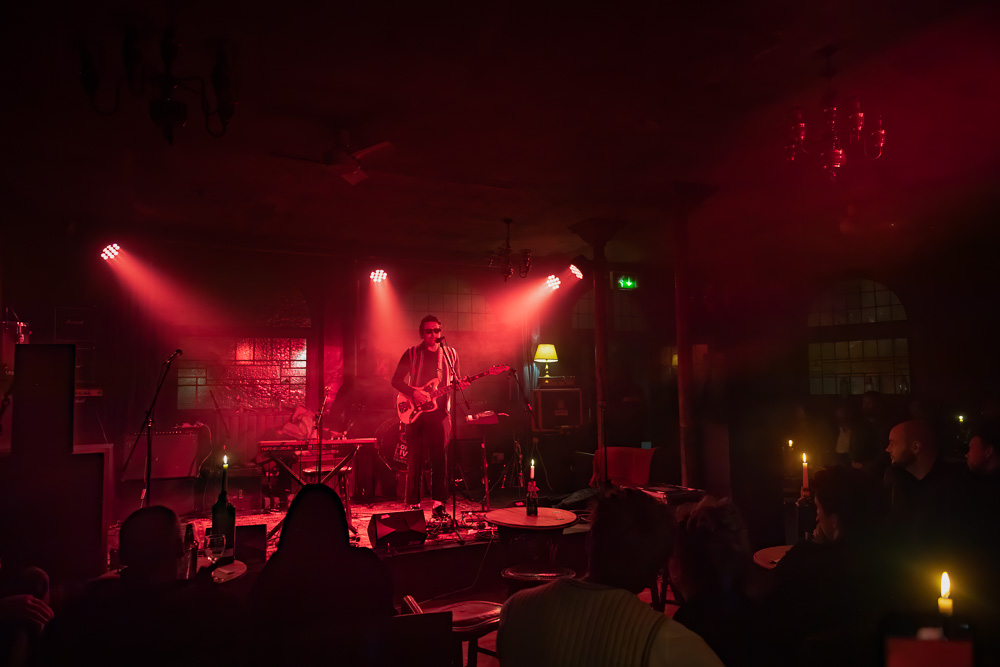 At around half nine, a musician dressed in a striped waistcoat, 7/8 trousers and Ray Ban Wayfarers takes to the stage. It’s Scott Lavene, though it is tricky to see through the smog. He starts up a drum machine and plays Nigel, the first single hewn from his new album Milk City Sweethearts, which will be released on 17 September.

It’s an everyday story about heroin addiction in a badly run-down part of town. The town in question is Boscombe, an outlier to Bournemouth where Lavene now resides. He makes it sound unremittingly shit. I lived there in the eighties and can confirm that it is – or at least it certainly was back then.

Nigel is perfect microcosm for what Lavene does best in his writing – taking dark, dark situations and showing them some light: ‘Janet’s in the parlour, she’s getting a new tattoo. The name of her true love to go with the other twenty-two. She’s had Nigel in her kitchen, she’s had Nigel in her bed. With his name on her neck, she’ll still have him when she’s dead.

On the record, there’s some great saxophone – straight out of Davey Payne’s top drawer from his time with Dury’s Blockheads. I’m immediately struck by how good this would be with a full live band, but for tonight, Lavene is solo so it’s just guitar and the impressively (I suspect deliberately) lo-fi beat box. “Cha cha cha” sings Scott just before he shuts it off. Turns out this is how he ends a number of his songs tonight.

This is Lavene’s first gig in 18 months and he tells the crowd he’s a bit nervous having been out of the loop for so long: “I did a pre-gig poo. I don’t normally poo in the evenings”. You wouldn’t actually know it though (nerves, not poo habits), for he seems supremely relaxed in front of this sell-out crowd and he is just as witty between the songs as he is during them.

Some of it is probably pre-planned: “Thanks for coming out tonight – risking your lives. I don’t mean Covid, I mean Whitechapel”, but he’s equally amusing when called upon to improvise. In Methylated Blue, he misses a note: “Perhaps I should have practised the singing. You can just listen to it on the record – it is a big note. This is what happens when you’ve only spoken to people for 18 months”.

Most of what is played tonight are from the last album and we don’t get many peeks behind the curtain to what’s coming next. One we do get though is the current single Lord Of Citrus, which was released on 25 May, a day before the show. It’s a song about loneliness, of feeling a little different, before finally finding a soulmate who feels the same. I’m not sure if it’s autobiographical but wouldn’t mind betting it is. There’s not been much time for us to get into it prior to the show but it has a fantastic video made by Canadian animator Ryan D. Anderson for us to play catch up in our own time. A character with a lemon head walks out of a job and into his own world, step by step in time with the music. It’s as hypnotic as it is strange as it is addictive. It’s very hard to only watch the once.

Back to the live music. Scott plays Light Of The Moon, a personal favourite of mine from the last record. He introduced it by staring down a member of the audience: “You sir look like you could relate to this. It’s about working in a factory, taking too much speed, and having your girlfriend leave you”. References to drugs and alcohol appear in much of Lavene’s material and that’s hardly surprising given he has had dependencies on both through most of his adult life. Without it, there wouldn’t be the stories he weaves so skilfully through the music but it’s good to know that these days he’s writing about it retrospectively.

Broke is probably Scott’s best-known tune. Eight minutes of spoken word, it has plenty of the above, plus a liberal dose of the helplessness of systemic poverty. Of course, it’s all wrapped up in the comfort blanket of Lavene’s humour. The revelation that short-term respite from his monetary woes was attained through chopping up bushes and selling off the bits as bonsai trees on Basildon Market gives everyone a laugh and smooths the edges from the bleakness of the whole thing.

For the song Happiest Boy In Town, Lavene explains he was once asked by a husband to be if it could be used as the first dance at his wedding. I mean, it is essentially a boy meets girl love song, but my God it hits some dark places and to be brutally honest, it would be falling far short of my top ten tunes to get a party started. To be fair, the guy requesting it did ask if it could be re-recorded, omitting all references to the taking of heroin. “No. Write your own song about her” was the reply.

Comparisons between Scott Lavene and Ian Dury are obvious and easy – maybe too easy, but there is one essential difference between them. Dury couldn’t sing and never really tried. Scott might not have a claim to be the next Freddie Mercury, but he certainly can sing and does – to great effect. 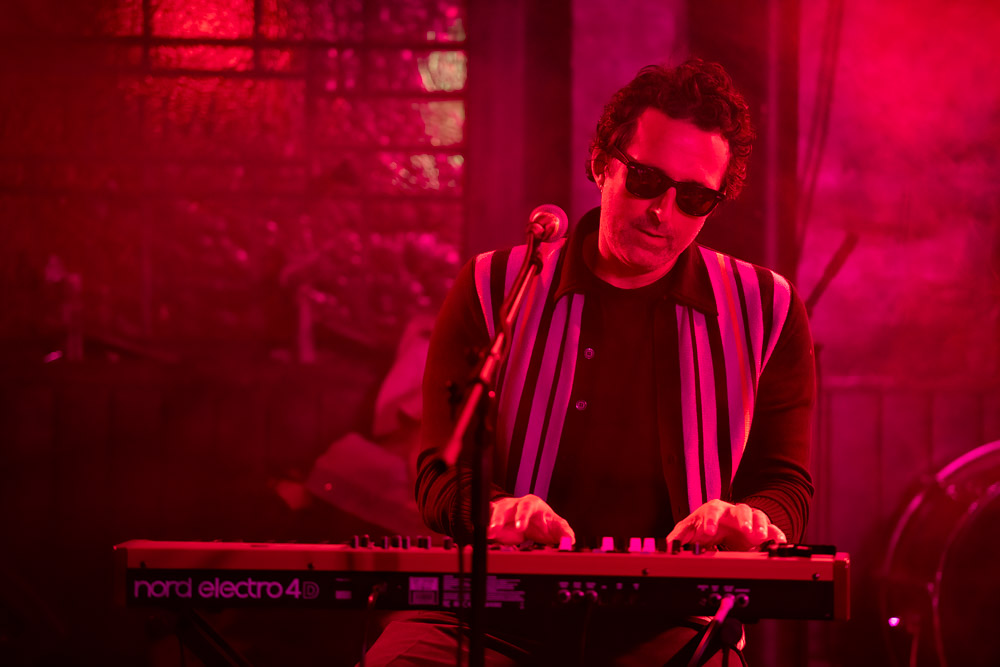 We hear that when Lavene closes the show sat at the piano, singing Say Hello To Zeus, a song he wrote about his father, who had recently passed. When Dury spoke about his late father in the song My Old Man, there was poignancy for sure, but I can’t honestly say I’ve ever been moved by it. That’s not the case here. There is no Bossa nova beatbox, just words and piano. The words are fantastic and the vocal soars.

It’s another from the new album and is a truly beautiful song – certainly something to look forward to in recorded form. The George Tavern crowd is absolutely silent throughout. This may be a reflection on the class of Lavene’s audience, or perhaps having missed live music for over a year, people have stopped taking it for granted. If it’s the latter, it’s a small bonus from the pain we’ve all been through.

There are no other Scott Lavene live dates in the immediate pipeline but expect a tour in support of Milk City Sweethearts post its release date of 17 September. I’d recommend attendance. It’s a great night out. 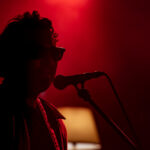 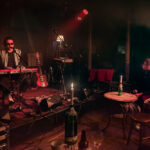 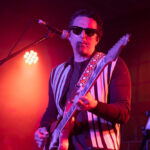 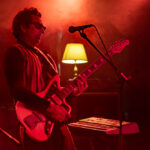 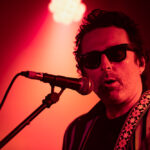 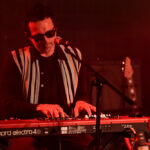 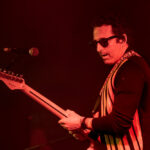 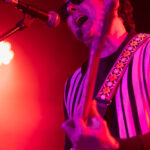 All words and photos by Simon Reed. His website Musical Pictures is here and you can visit his author profile for Louder Than War here. He tweets as @musicalpix.

The days are getting longer and longer, and the days are...